During winter time we had some ice fun I didn't write about as it wasn't really planned. But now, inspired by Yuliya, the writer of Welcome to Mummyhood, I decided to go for it again.

We've altered the task she introduce on her blog to suit our Hungarian National holiday and I used red, white and green IKEA beads instead of sequins. 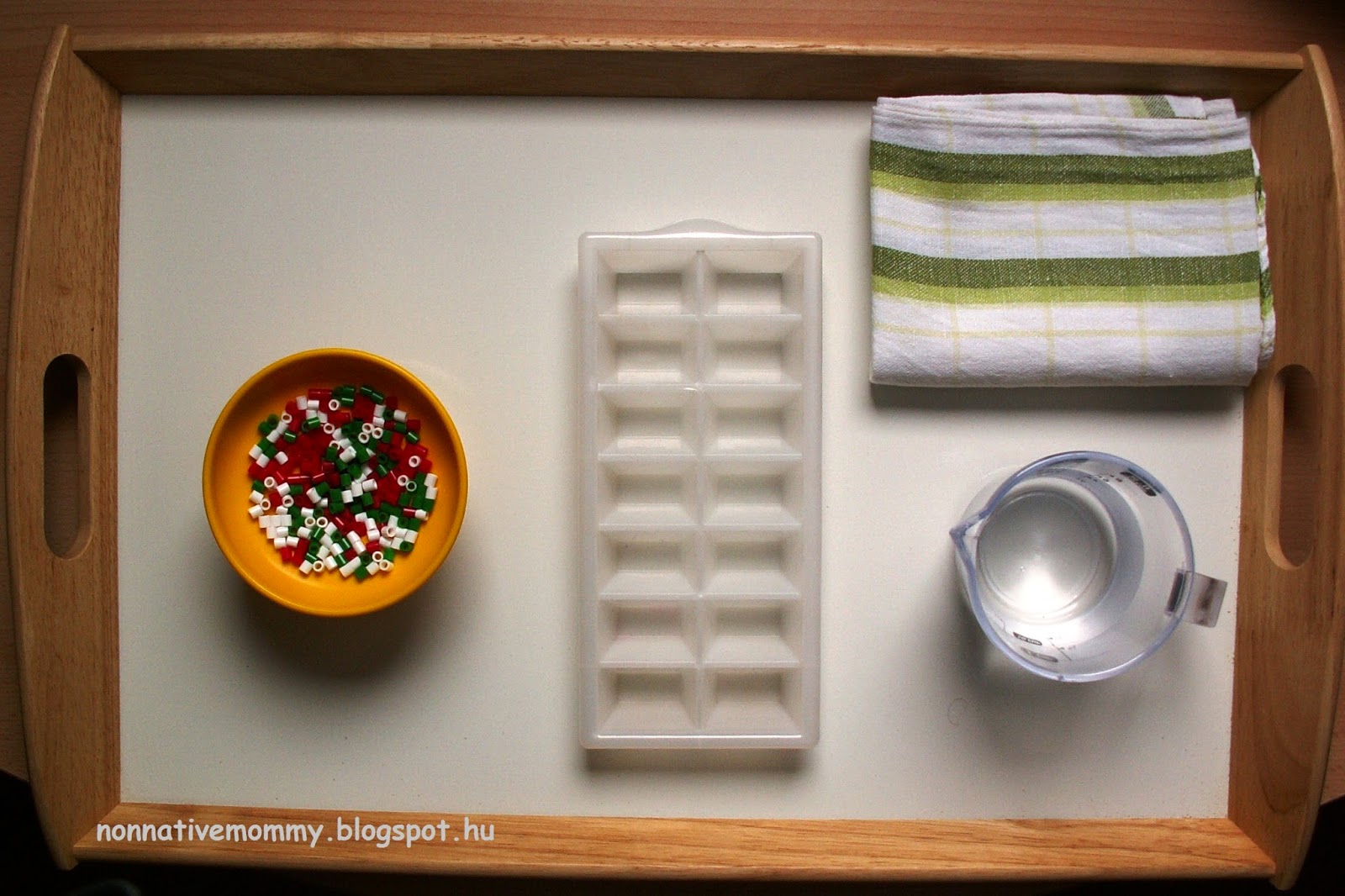 E. filled up the ice cube tray with the beads. 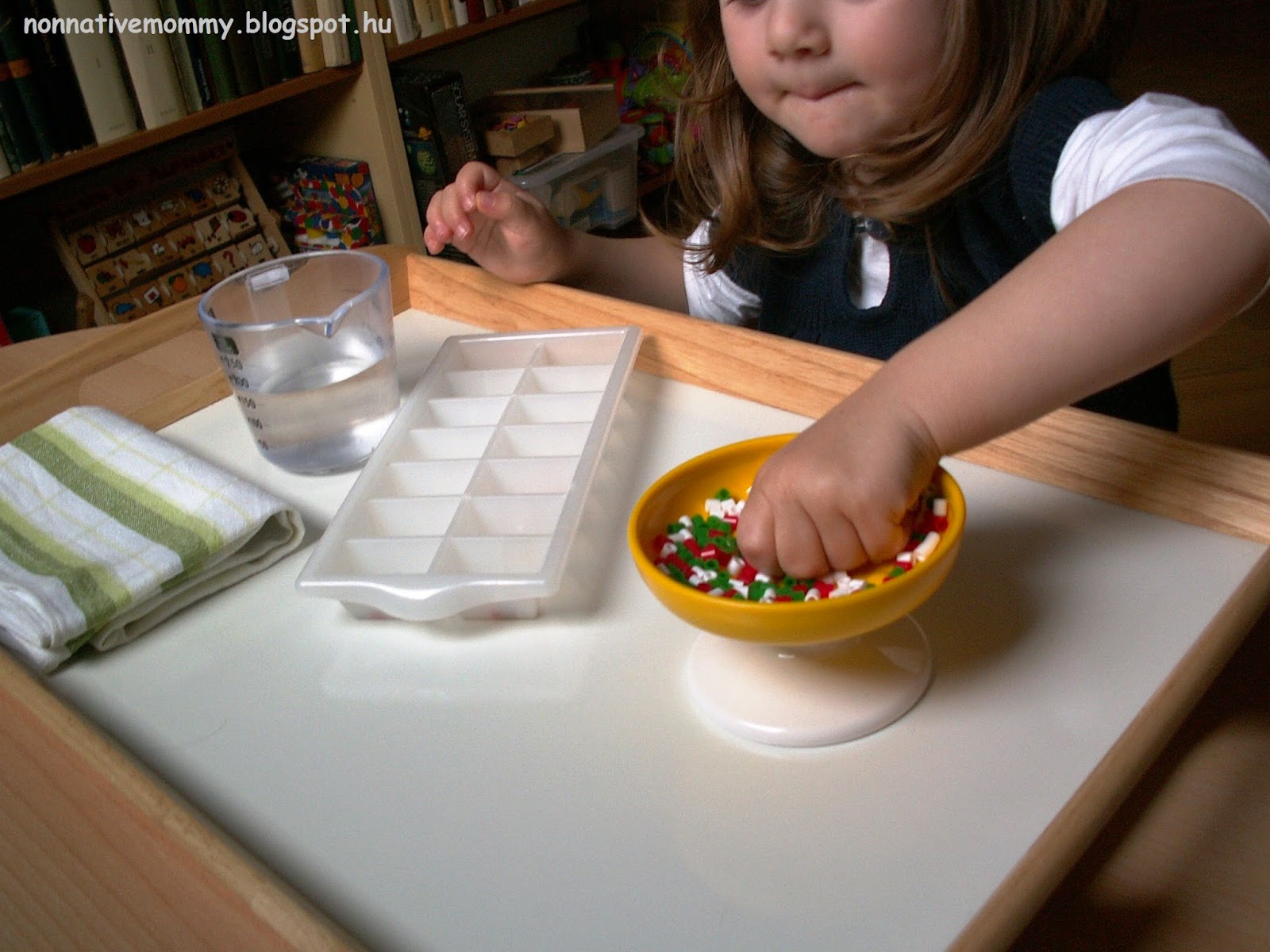 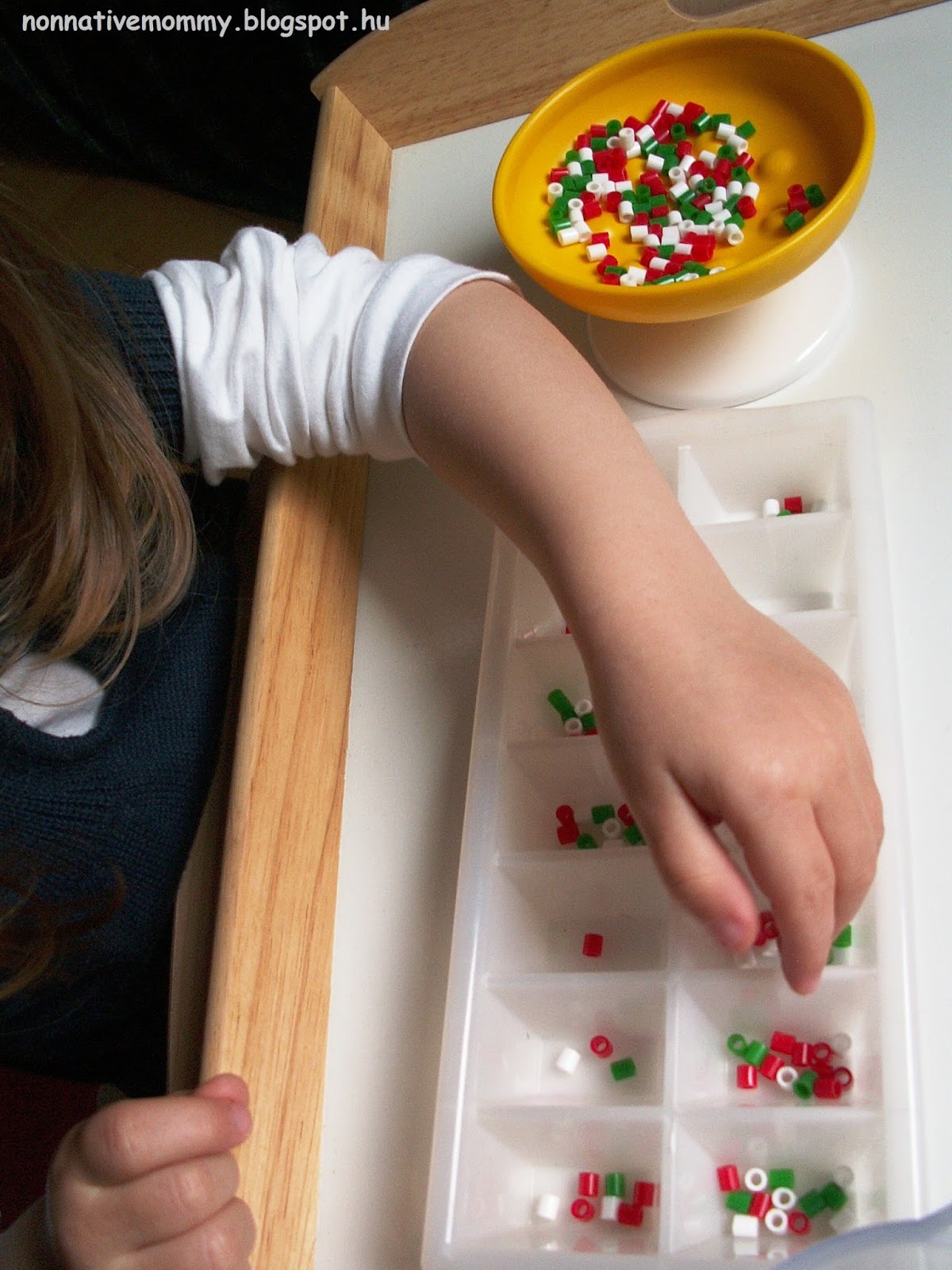 Then she poured the water (the beads are so light that they were floating on the top.) 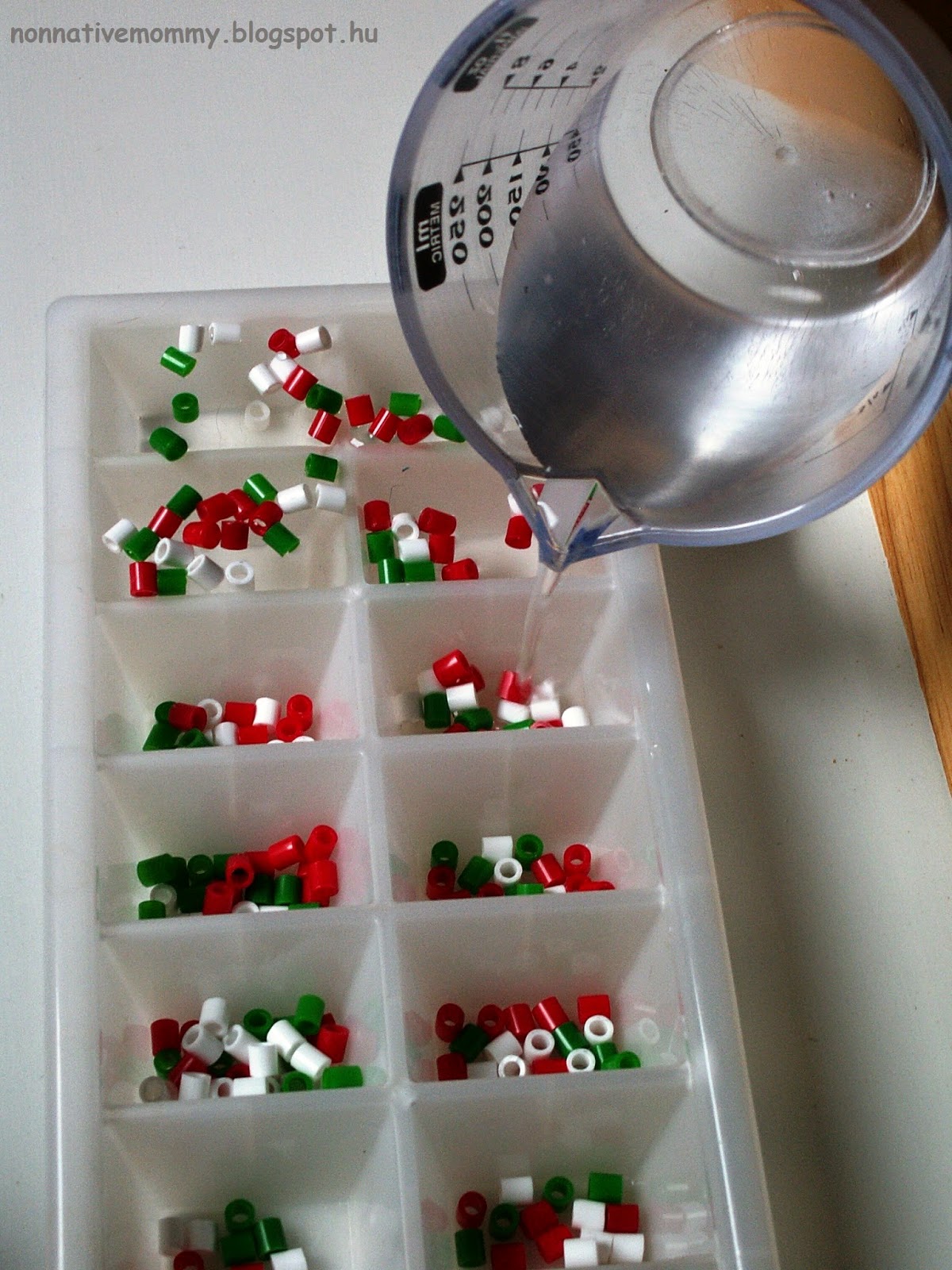 After that we put the tray into the freezer. We checked it on the same day whether it was frozen or not, but we had no luck.

We did this preparation in Hungarian and talked about the colours of the Hungarian flag and how water turns into ice under 0 Celsius degree. She listened closely and asked questions about what liquid is and what frozen means. I gave her a basic explanation.

The next day we took it out of the freezer and I set up this tray for E. We were in English this time. 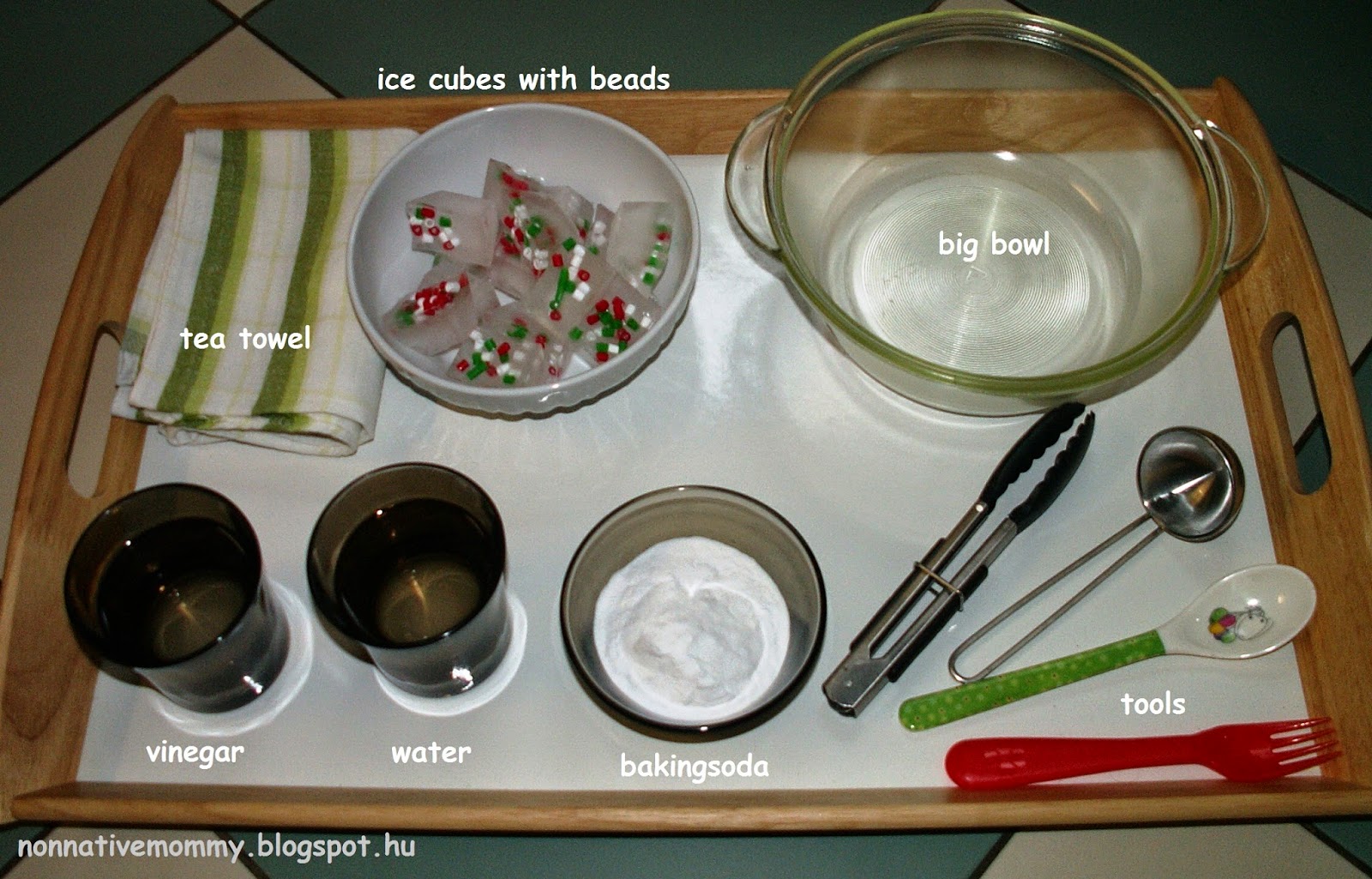 She was amazed as soon as she saw the tray.

First, she was a little hesitant what to do. But then she got the hang of it.

She used all the tool (tongs, fork, spoon and ladle) I prepared for her. Picking, spooning, ladling. First, she was touching the ice cubes with her hands. Abruptly, she said: - It's cold and wet. I don't want to be wet.

And she picked up her favourite tool, the tongs. 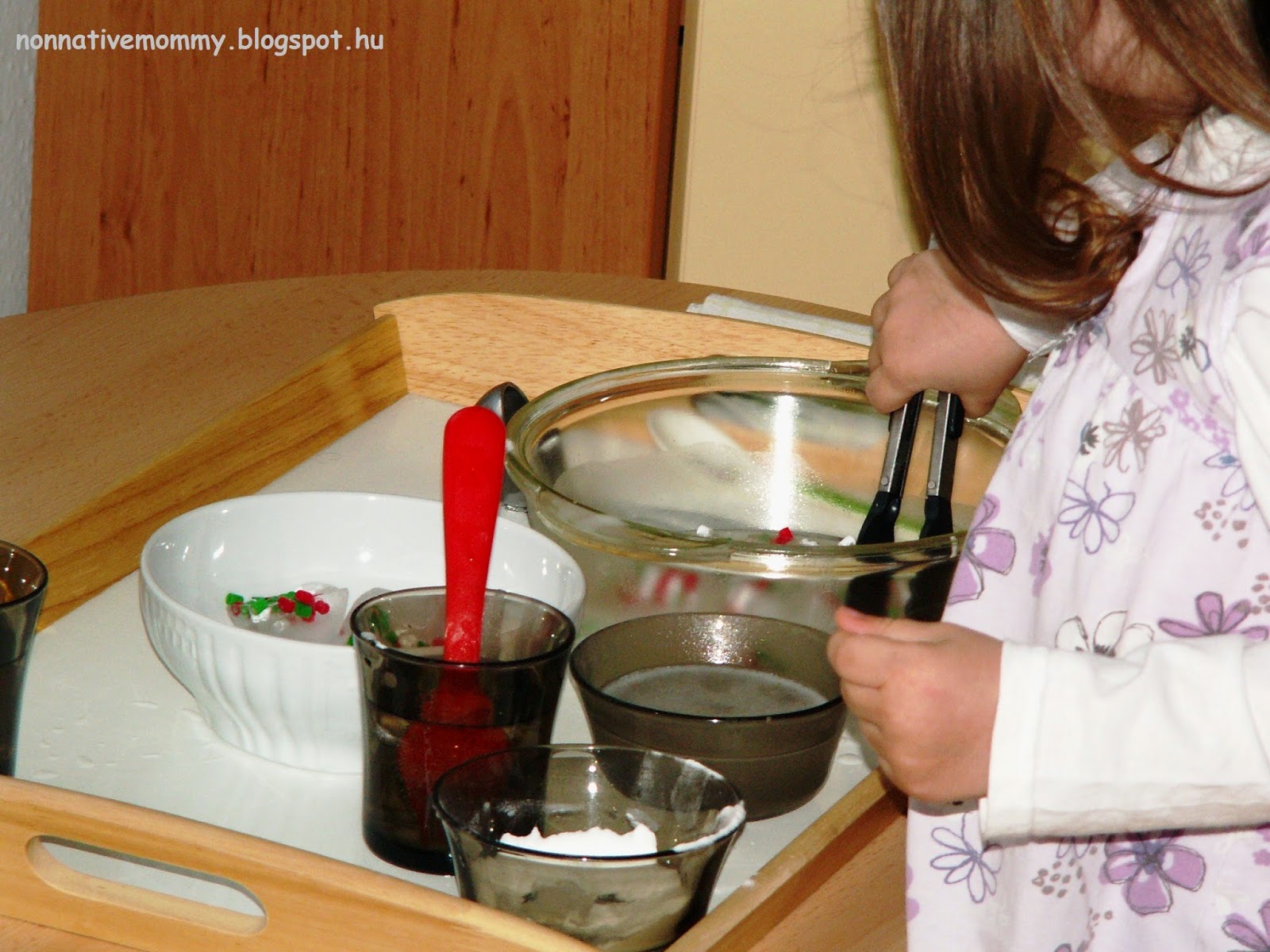 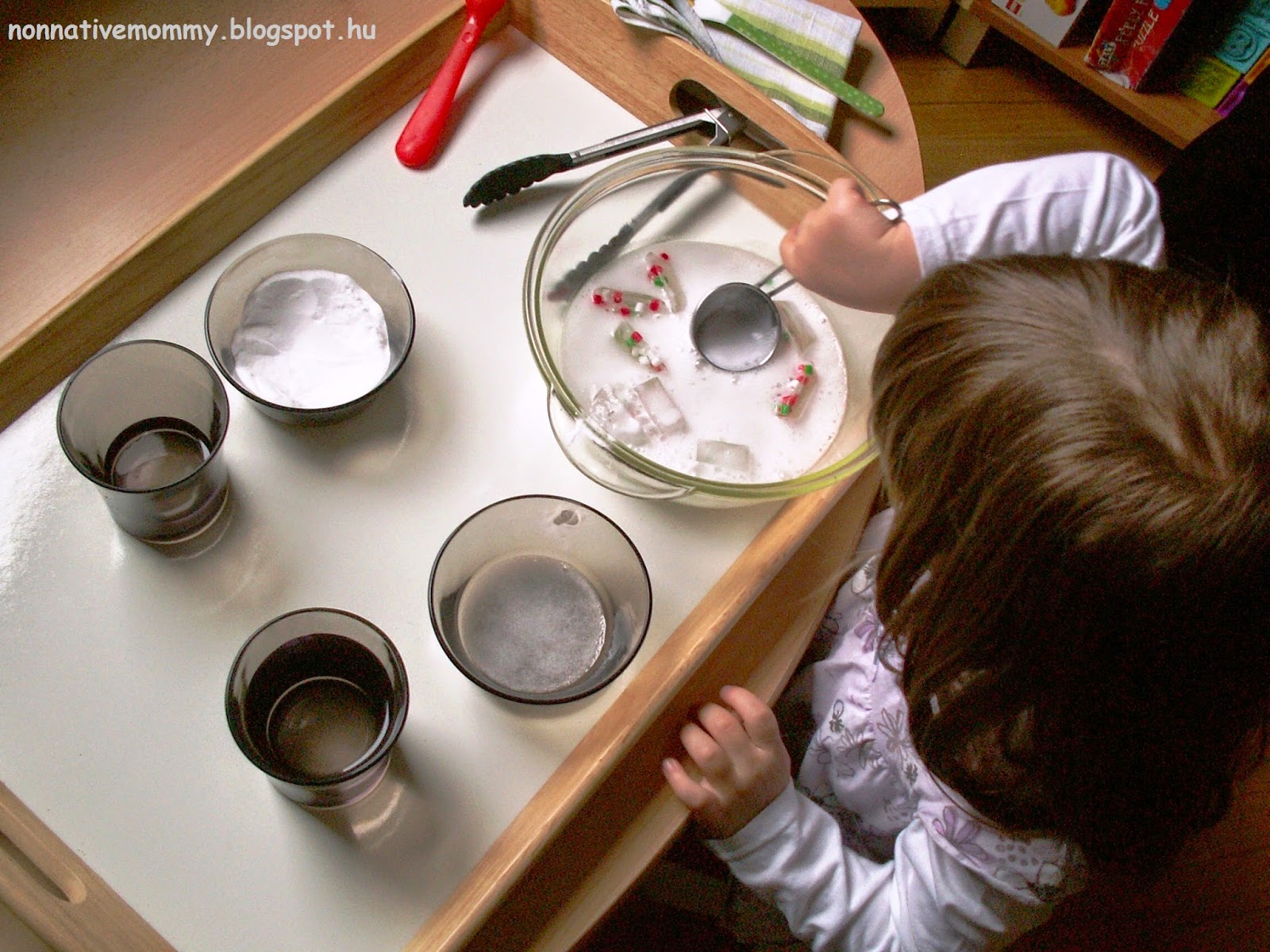 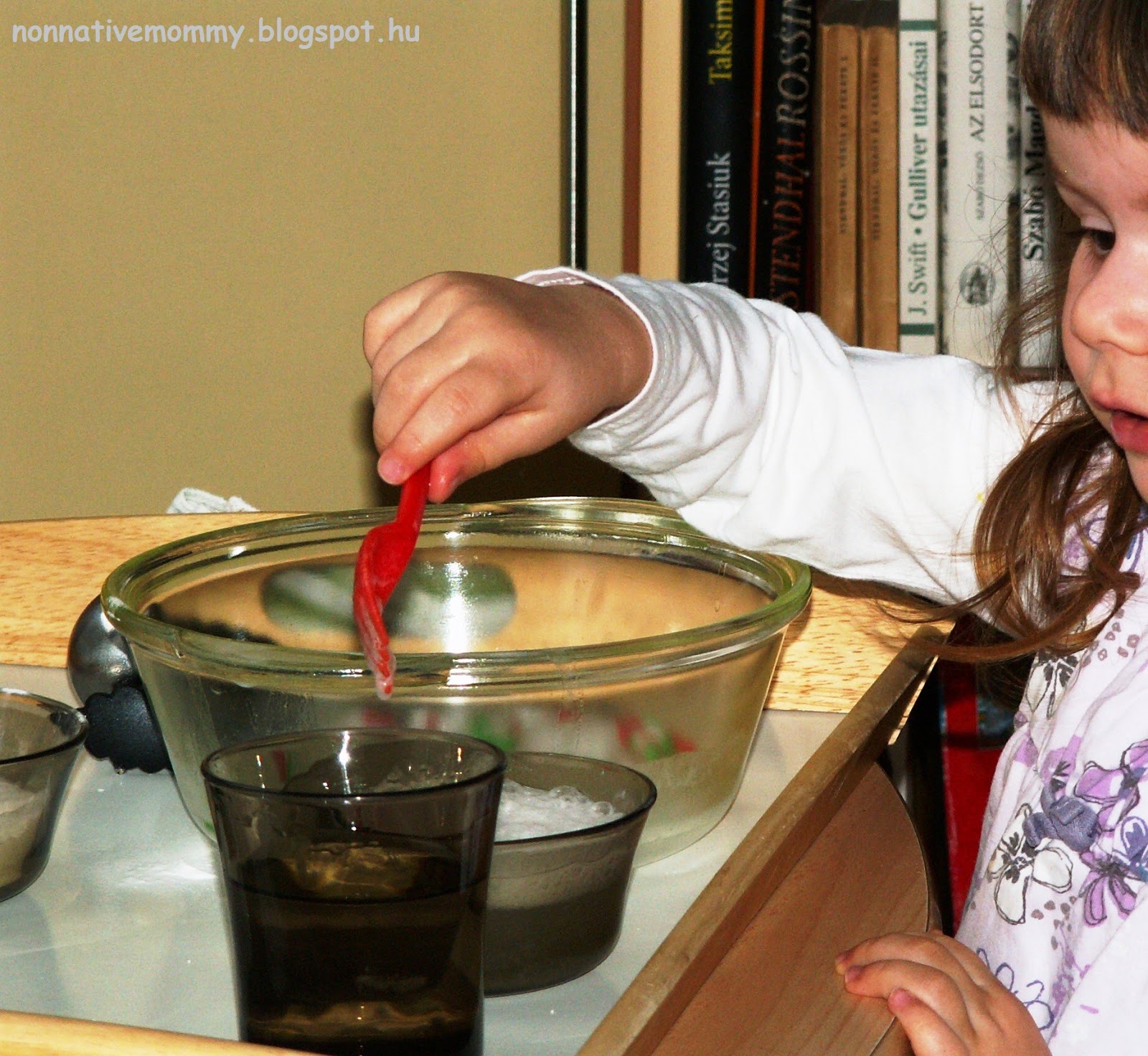 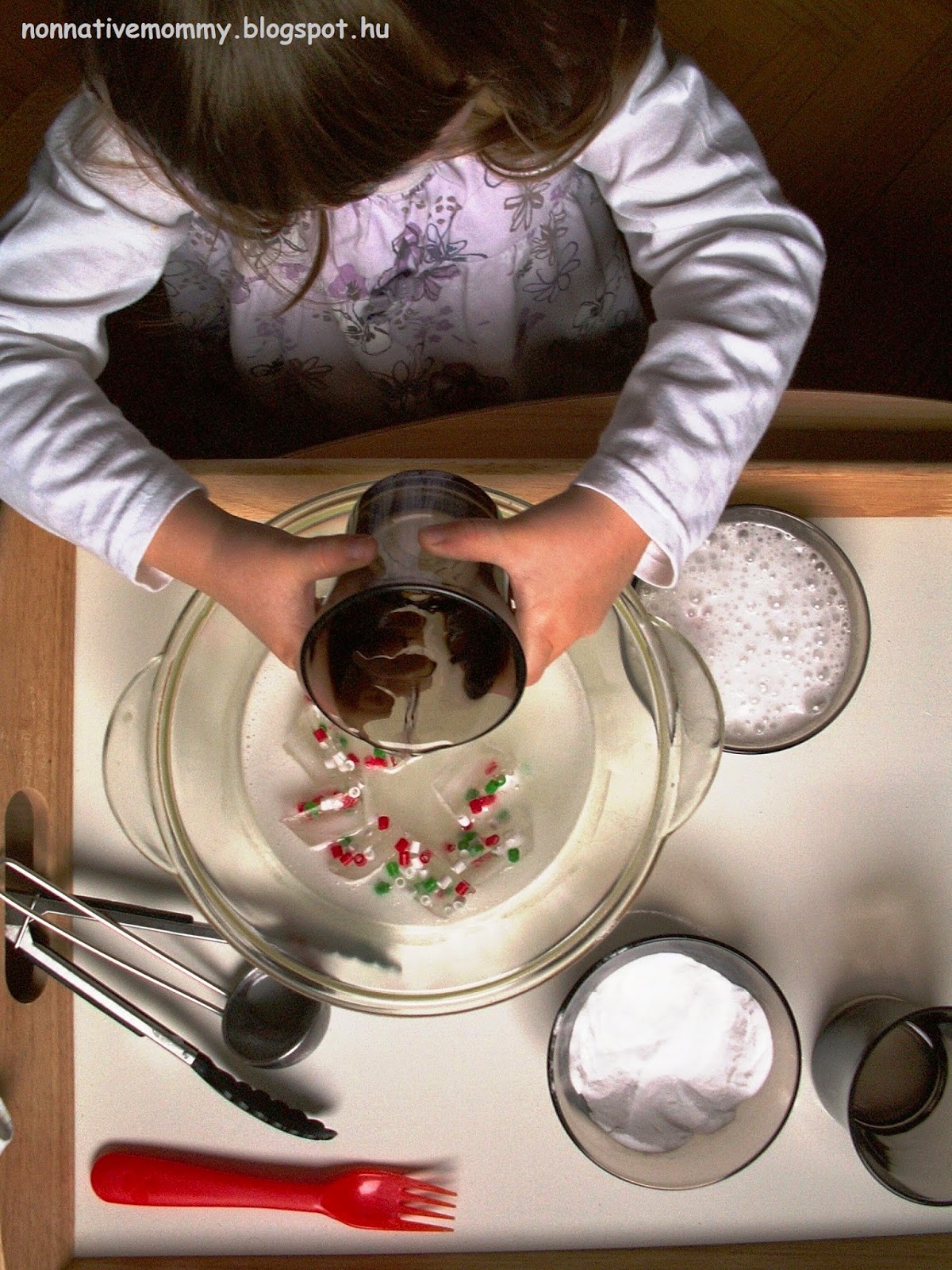 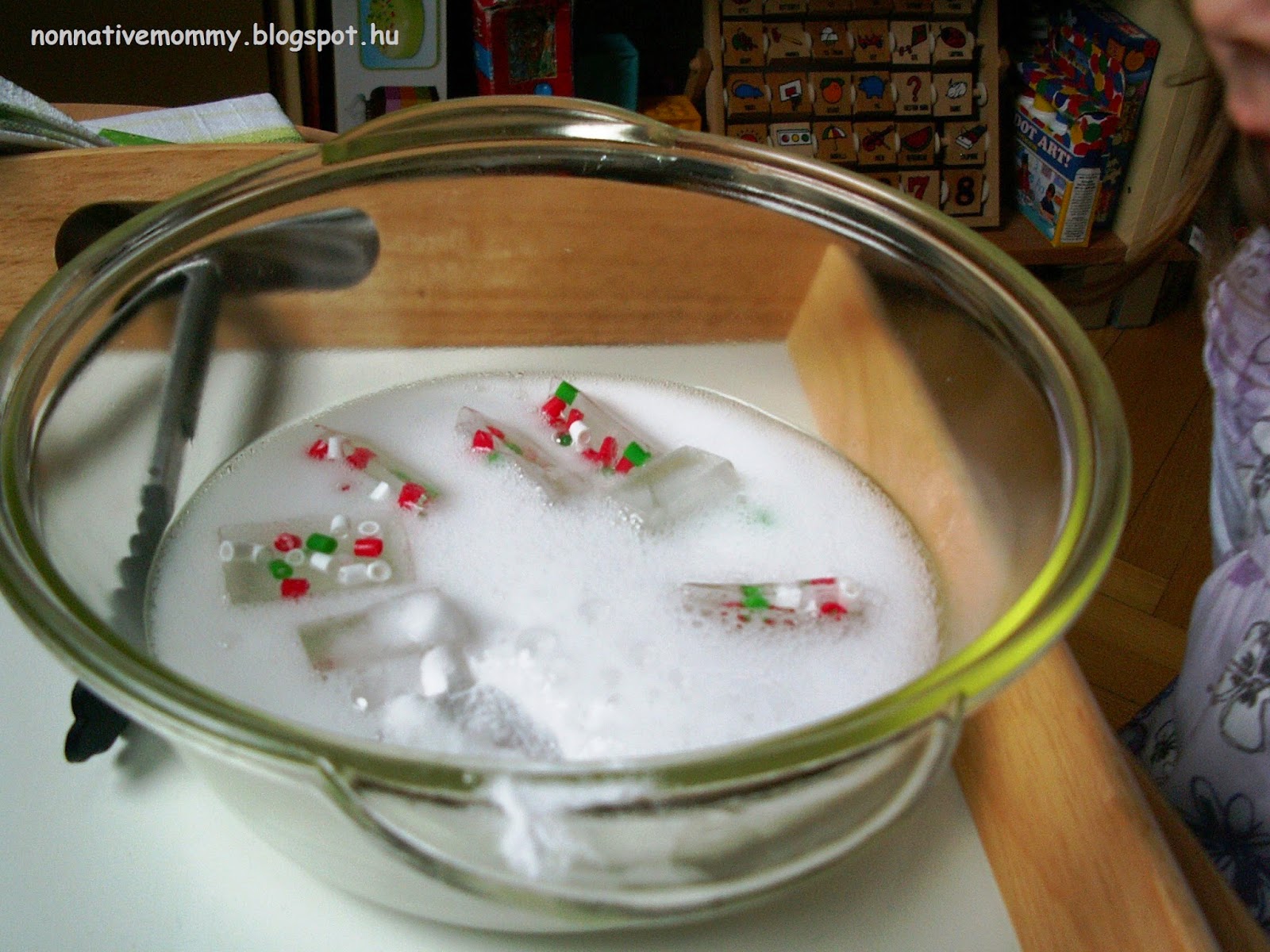 And she was bewildered by the chemical reaction. She was playing with it for 40-45 minutes. Mostly alone or with very little assistance. 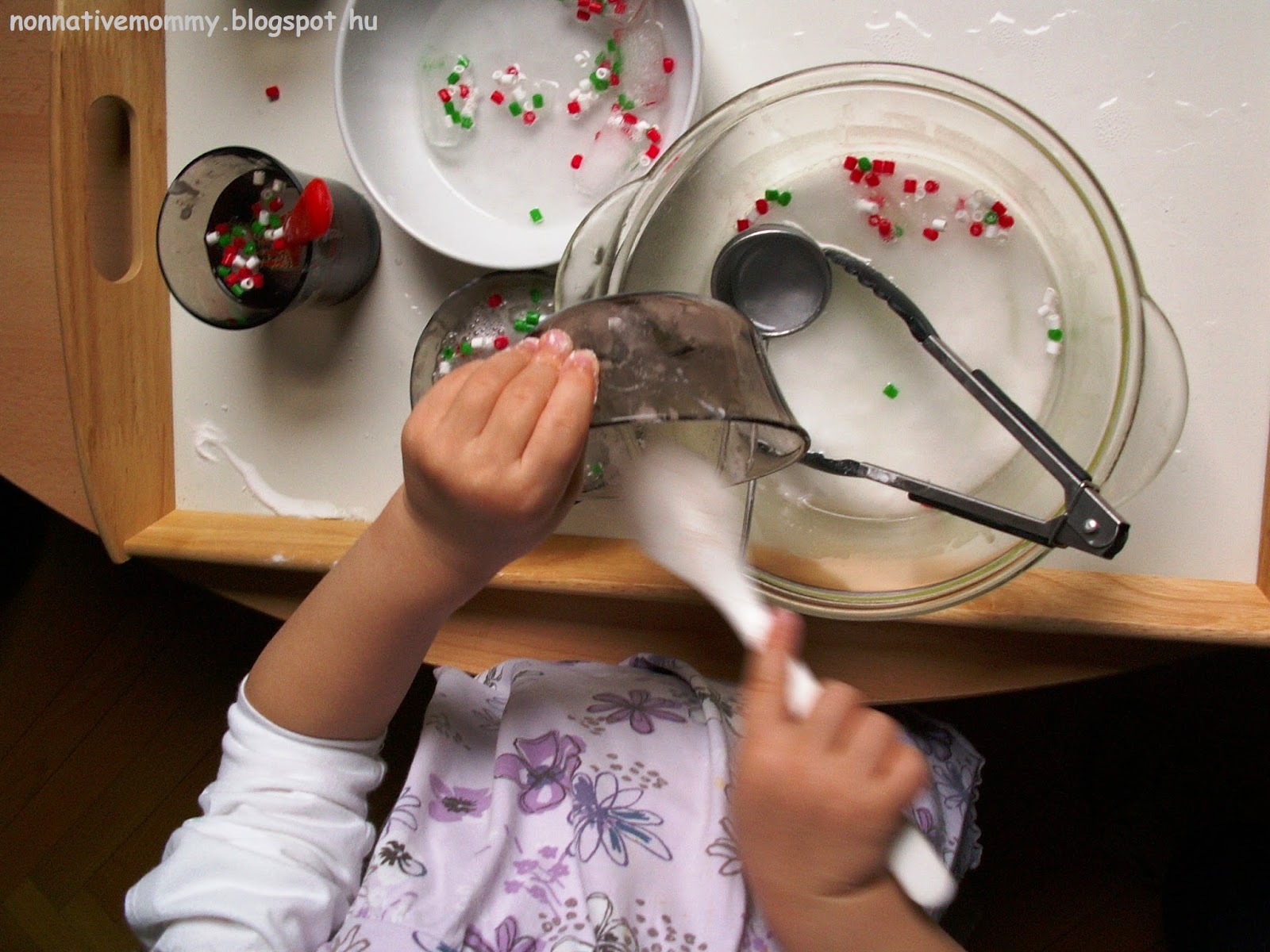 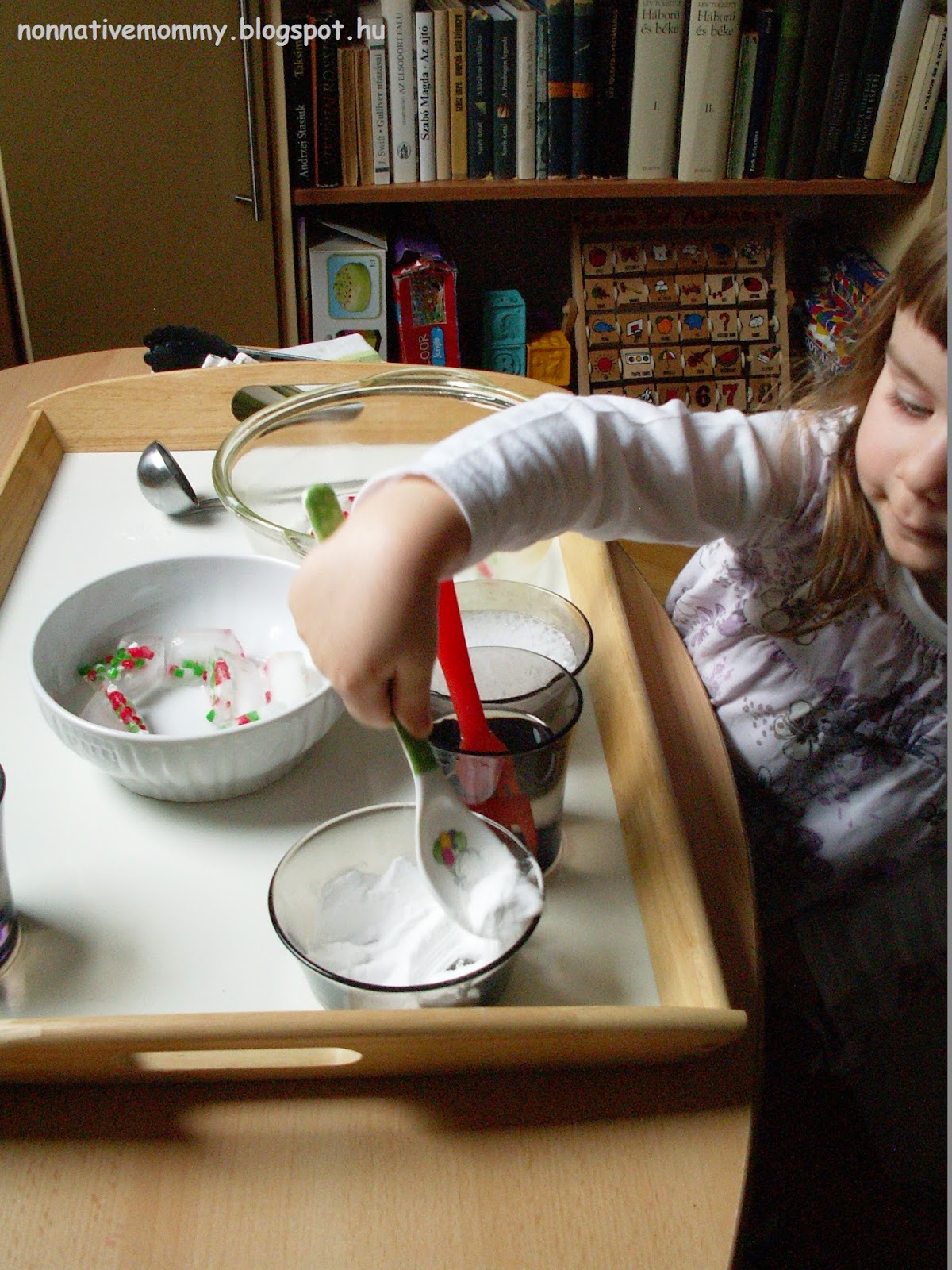 Once she tasted the baking soda. Nothing happened, of course, and when I asked her if it tasted nice, her answer was positive. Luckily, she didn't try it again.

Before her nap time, she was asking about the ice experiment (vinegar and experiment are words that gave her a hard time to pronounce. Once she said ligament instead of vinegar... haha. So cute!)

All in all, it was a wonderful experiment, loads of fun and a lot of new vocabulary learnt in both languages. We'll definitely do something similar again. I was thinking of volcanoes...

Here are some vocabulary/phrases connected to our experiment: